I’m sitting in the top branches of a Grandmother Oak.

The bark of this ancient tree is rough on my hands and legs as I climb.

This old Oak is one of my favorite trees.

I’m ten years old and I’m in my Woods.

I’ve climbed this tree dozens of times since I started playing in this great expanse of Nature just on the other side of our gravel driveway.

The leaves are rattling in the soft breeze that sways the small branch  I am perched upon.

The sun is shining on my face.

The Woods were my sanctuary from a home life filled with chaos and alcoholism.

As an escape, I became a tree climbing Virtuoso, to the extent my dad nicknamed me Tarzan, which was cool when I was ten but mortifying in high school.

I grew up in a tiny shingle sided farmhouse just north of Omaha, Nebraska.  There were just two doorless bedrooms for the five of us. 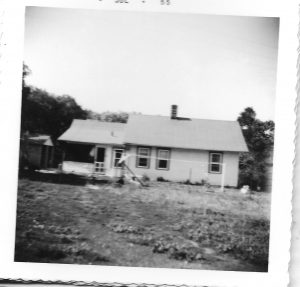 Because I was the youngest I was relegated to sleep on the couch in the living room. Eventually my couch was upgraded to a hide-a-bed. Years later my sister went to college and her bedroom became mine.

The Woods, were The Place; where I Played,  used my Imagination, and where I began a profound relationship with the Creative.

There were the great easy climbers and the “Impossibles”; trees with branches far too high for me to grab hold.

These amazing trees were my secret friends and my Greatest Teachers.

Little did I know, days after I had been sitting in that magnificent Oak, bulldozers would arrive and begin to demolish my Mentors; push them into towering mangled heaps, and unceremoniously set them ablaze.

A few weeks later I took my mom and sisters back to where the Woods used to be.

The pyres were still smoldering.

There is a grief and loss that haunts our lives and Culture.

I have felt this heartache in so many people.

I see this subtle longing at times when I’m asked “what do you do?”

That moment sometimes sparks a wistful glint in people’s eyes;

a desire for something so familiar, yet so distant and out of reach.

Collectively, we have been slowly untethered from The Creative.

The Loss of those Woods literally ignited my Creativity.

I was creative before the Conflagration.

I was the kid in class who was asked to draw hotrods, aliens, and the Peanut’s comics.

My specialty was Snoopy.

After the fires, I began to teach myself the elements of drawing; shading, texture, line, and composition.

I was not a likely candidate to become an artist.

There were no artists in my family or our neighborhood.

Discussions about the arts did not happen at home or at school.

The list of artists I could name started with Leonardo and ended with DaVinci.

The only object on our walls at home was a paint-by-number of Jesus praying next to a large rock. 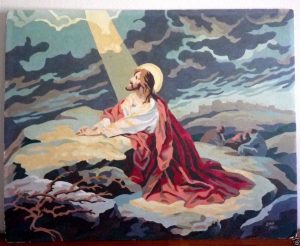 I began to study objects intently and taught myself how to make them appear 3 dimensional on a 2 dimensional surface.

A shy, chubby country boy using typing paper and number two pencils snuck into the Vast Cathedral of Art and started drawing in a far off corner.

A few years later, much taller and leaner, he put up a rickety easel in his newly acquired bedroom and taught himself to paint.

He was calling himself an Artist.

Audaciously naming myself an artist was transformational.

At the tender age of ten, I rose out of the ashes of those majestic Woods and proclaimed, not that, “someday I was going to be an artist”, but that “I am an Artist!”

From that moment on I remained deeply inside The Creative.

In attics, garages, basements, large studios, some with heat some without; The Creative and I spent endless hours making art…thousands of drawings and paintings.

In 1997  I was achieving my goal of being an independent artist.

I had a 1,500 sq./ft  Live-in Studio in Seattle. I was working on several commissions, and deepening my involvement in the local art scene.

After many years of working multiple part time jobs I was finally supporting myself as an artist.

I had attained a Dream that my family, friends, and teachers had said was impossible or highly unlikely.

I was feeling an Exuberance as an artist which I hadn’t felt before and I wanted to express this feeling in my art.

Using myself as the figurative subject, an artist friend and I did a photo shoot with majestic sweeping gestures.

The frolicking poses were ridiculous and painfully awkward.

We  looked like an advertisement for a Thomas Kinkade Ballet.

Shortly after making a few of these  paintings I cut them up and painted over them.

This idea of visually conveying Joy lingered; it sort of haunted me.

I couldn’t “figure” out how to accomplish this.  So, I gave the project a name; The Exaltation Series.

I made thumbnails, I made sketches, studies, drawings.

I made more paintings with different figures. 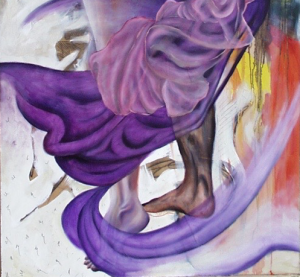 Drapery worked for Renaissance painters. It didn’t work for me.

Everything I tried looked corny and contrived.

Seven years later, having shelved the idea for a while, I found my way into Exaltation from a surprising, yet strangely familiar path.  Sorrow.

The kindling this time was the death of my father.

Dad was a hard working, old school, midwestern farmer and laborer. Together we put up hay, planted crops, killed chickens, and fixed whatever needed fixing. 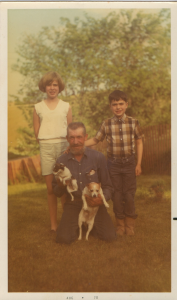 My father passed on to me incredible wisdom and practical skills about survival and tenacity .

Although dad had stopped drinking when I was in high school his depression and anguish lingered in the shadows of our home.

I had numbed myself to the sorrow.

In 2004, I succeeded in linking my inner feelings with an outer expression; a monumental drawing titled The Great Exaltation. 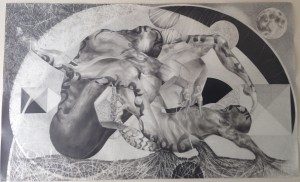 With my earlier attempts I tried to express Exaltation without having made the passage through my personal inner grief.

Without authentically acknowledging those buried inner feelings of loss I was never going to make Art of Excellence.

I tried cheating my way to that Higher Aesthetic.

I was trying to convey Joy while avoiding Grief.

The best of artists have the ability to feel and express lament and sorrow.

I believe without this ability, allowing inner space for the humanity of loss and despair, Art as well as Life, is impoverished.

Most of us have lost something deeply meaningful.

That Sliver in our Souls is the grief of losing The Creative.

Play, imagination, and creativity get fractured around age 7.

These three elements are the Foundations of How We Learn.

These three vital aspects of our young lives begin to be labeled frivolous, superficial, and a waste of time.

The benefits of creativity, imagination, and play within all curricula are then lost to the urgency of scholastic performance.

The Creative is slowly diminished.

With every passing year there is less time in the day for kids to express their creativity, use their imaginations, and be playful.

The likelihood of setting The Creative aside increases as home, schools, and communities place more demands and obligations on children’s time.

We end up misplacing The Creative like an old toy.

Or, in many cases, that desire and longing for a relationship with The Creative, if not nourished, often turns into depression, addictions, or numbness.

If you ask a room full of 5 year olds, “Who’s an Artist?” all their hands shoot up!

Wait five years, ask those same kids that same question, hardly any of the kids raise their hands.

In her book, Daring Greatly, University of Houston professor Brene´ Brown notes 42% of those interviewed in her shame research said they experienced serious shaming in school directly connected to their creativity.

I imagine many of you have your own stories of Creative Collapse.

A friend once told me she stopped making art in third grade because her teacher, in front of the class, made fun of a drawing she had just made.

A close friend shared how she couldn’t be creative at home because her family would humiliate and ridicule her.

A woman recently told me she stopped singing because in grade school during music class, the girl in front of her turned around and said, “Stop it, you can’t sing!”

These cumulative creative fractures and collapses have wounded us individually and I dare say have wounded our culture.

In our youth we are splintered when the pressures to compete  academically overshadow and trivialize creativity.

We become Untethered from meaning and purpose when social structures denigrate and restrict imagination, originality, and play.

Individually and collectively Creative Collapse has interrupted our potentials as Humans and is stifling True Cultural Progress.

Think back to when you were 5 or 6. What kinds of play held your attention?

What did you play, that when told to stop, you couldn’t wait to start again?

Did you love to write stories?

Did you take things apart and put them back together?

Did you wake up thinking about playing your guitar?

Was it clay or paint that captivated you?

Maybe you loved to sing…

Or you just couldn’t stop dancing!

What if you tried  that again?

Have fun with this.

Your love of clay might turn into a new interest writing poetry.

Be Playful with your possibilities.

I am prompting your reunion with The Creative.

I am reminding you, you all once thought about and looked at the world through super creative eyes.

You once approached every hour with a wide open Imagination and a passion to Become and Express your Unique, Original Self.

Reunion with The Creative requires risk.

The risk of re-engaging your imagination.

The risk of remembering how to play.

The risk of connecting to your original creativity.

The risk of meeting your Self.

If we don’t risk at our individual levels how are we going to make any progress on the Planetary level?

The Creative is the Indwelling Spirit experienced as feelings and emotions which must be expressed in all its genius, originality, and daring.   The Creative requires immense vulnerability, deep listening to the currents of the invisible, and a radical loyalty to one’s Self.

All of us as children lived and breathed The Creative.

And that child is still there…

Waiting for you to find what’s been lost-