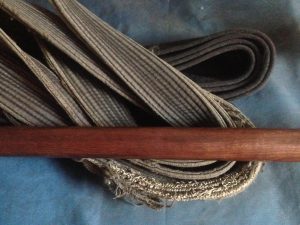 Karate and Aikido obi and bo

The year is 1979,  I am standing in the Nippon Shobukai dojo with 10 other Karate students awkwardly holding a six foot long wooden staff called a bo.  Each of us are inwardly excited, yet outwardly trying to remain calm.  We are all blue belts which means we are finally advanced enough to st
art practicing with weapons.

We had to wait two years before starting weapons practice.  Which makes sense.  Putting very hard wooden objects in untrained hands, especially young male hands, can lead to some very dangerous situations.  Even in trained hands weapons training can be a hazardous endeavor.

As neophytes we were still deeply impressed by all the black belts in the dojo.  Mr Miller was no exception and he  was in charge of our first lesson.  This lesson, as all first lessons in our dojo, was about etiquette, proper handling of the bo, and just a few basic techniques; stances, blocks, and strikes.

At some point while showing us how to hold the bo, Mr Miller told us something impactful which has remained with me every since.  Years later, I would share this same concept with my own Karate students when teaching them Kobudo; the way of  weapons.

After calling a student up front, he told the unsuspecting blue belt to stand in one of the newly learned stances and hold his bo in a ready position.  Mr. Miller then effortlessly knocked the bo out of the hands of the very surprised student.  The clattering staff made quite the sound on the hardwood floor.  All eyes in the dojo were on us now.  The yellow and white belts were wide eyed.  The brown and black belts were smiling.

“You must hold your weapon as if it is a bird;

not too lightly that it flies away and not too tightly that you kill it”.

This made so much sense to me, holding a bo was just like holding a pencil or a brush.  Obviously, too loose and the pencil falls out of your fingers.  Yet, it took me years of practice to not clutch the hell out of my pencil,  not to hold my breath while making marks, not to clench my jaws when drawing, and not push the pencil so hard that I would break the graphite tip.  I eventually understood what kind of pressure and grip was needed for various techniques.  I knew how to hold the bo because I knew how to hold a pencil.

Innovation and creativity are similar to holding a pencil or a staff.  Approaching innovation imprecisely or vaguely will cause it metaphorically, to  fly away or clatter across the floor.  Yet, I believe the later is what happens most often, as it did with me when I was teaching myself how to draw.  Businesses grip and clasp and clutch and seize and squeeze innovation so tightly they kill it.

Without the right skills, tools, and lessons, businesses, corporations, and entrepreneurs clutch the hell out of innovative ideas and kill them.  Tensions build up in their breathing and bodies interrupting the relaxed openness necessary for creativity to emerge.  People are pushing to innovate  so hard they end up breaking themselves.

I have developed  better and more productive ways to engage innovation and creativity.  I teach the skills and knowledge necessary to move innovation forward.

I teach how to “Unclutch” ideas, how to get rid of tensions that creep into our bodies, and how to stop squeezing the hell out of and killing creativity.

I teach people how to hold innovative ideas like a bird; not too lightly that the ideas fly away and definitely not too tightly that you kill them.